I’ve got to admit it. I’m slightly ashamed. Over the past twenty-five years I’ve trekked across a good chunk of Mexico attempting to discover it’s wide and varied cuisine. In all that time I’d barely cracked the surface. Back home, it turns out, there’s a spot just three blocks down the road that I’ve been sorely neglecting.

Taqueria Playa Tropical has been putting up Mexican fare in uptown New Westminster since 2011. Since their inception, they took over the space next door and doubled their size. When I heard they expanded, I knew full well that good eats were afoot. I dragged Uncle Ben from Chowtimes away from a busy day to join me in a mini-Mexican feast.

Right off the bat you’re served complimentary tortilla chips and squeezable salsa. There’s not too many restos that will toss you free anything.

Most would prefer salsa fresca or salsa crudo, but these ones hit the spot. The Salsa Roja con Chipotle has a mild, smoky punch. Really good. But the Salsa Verde beats it hands down. It starts off sweet and garlicky then the slow burn works itself in. Very, very addictive stuff.

Having had Ceviche on only a few occasions, I’ve not a lot to go on. This version is quite solid. Very fresh. The whitefish is firm. Avocado, cut fresh. A good whack of cilantro and it’s quite tangy from a load of lime. Nicely done.

END_OF_DOCUMENT_TOKEN_TO_BE_REPLACED

Snackin’ in the Yucatán

Mexico is a snacking wonderland. From the ubiquitous taco stand to a wide variety of regional treats, antojitos can be found virtually everywhere. Wikipedia sums up antojitos perfectly: “a Mexican street snack designed to satisfy a craving“.

As we were wandering the streets of Piste, near Chichen Itza, I had an intense craving for Pollo Carbon (Grilled Chicken). We passed by a few empty spots with some dodgy looking poultry on half-warm grills. After nearly giving up, we spotted smoke billowing from a thatched hut a block away. At the very front of the small restaurant an older lady was tending the grill. Three or four whole, butterflied birds were slowly being cooked to perfection over smouldering charcoal. Heaven.

Sometimes the best places don’t even require a name. 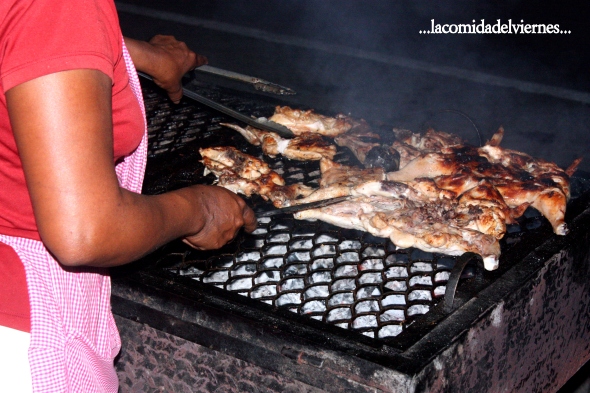 As we approached, salivary glands went into overdrive. I was literally drooling. I just stood there enveloped in the mouthwatering, smoky aroma. Looking around the few occupied tables, I noticed everyone was digging into a shared platter. As there was no menu and no signage whatsoever, we ordered a whole chicken.