Ah, Sunday..the best day of the week. Everything gets slowed down a notch or two, it seems. More often than not, it’s a late snooze, a slow meander to Starbucks and then off for another dining adventure. Lately we’ve been hitting up a lot of Dim Sum. This past week was no exception. Our mission on this day was to check out the award-winning Red Star Seafood. 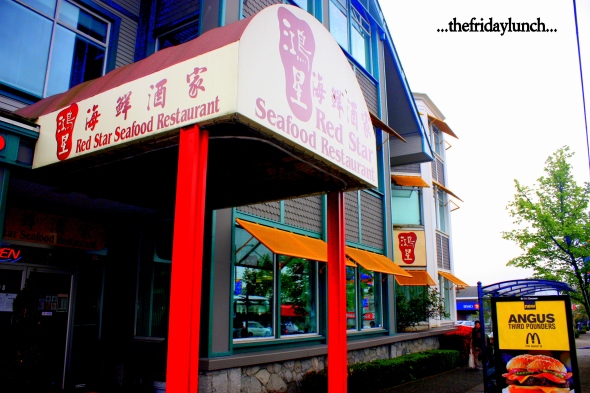 Red Star has won a plethora of awards. Last year they took home the gold for their BBQ Duck at the Chinese Restaurant Awards. This year it was the “Most Innovative” award for their Dungeness Crab with Wild Rice.

As with most large, upper-scale Dim Sum restaurants, this one was packed to overflowing on a Sunday afternoon. Even with a reservation, we had to wait thirty minutes for an opening. After the third time the hostess told us, “Five minutes, we’ll call your name!”, we seriously considering crossing the street to Talay Thai. Just as I was about to bolt, our table was finally ready.

The ordering system here is somewhat confusing. The checklist is only in Chinese. The numbers correspond to the items in the regular menu. Photos of the menu can be seen here.

Here it is! The 2010 CRA Critic’s Choice Gold Medal winning BBQ Duck. I gotta say, this is damn good! Make that great! Very tender and juicy…the fat melted away to create the most succulent duck imaginable. The duck is basted for hours in a sweet five-spice marinade to achieve the beautiful lacquered finish.

END_OF_DOCUMENT_TOKEN_TO_BE_REPLACED

For quite a while I’ve been trying to drag the gang out to Burgers Etc. BBQ House. Usually we opt for some sort of Asian fare a little closer to the office. This Friday we finally made the trek up to Hastings and Gilmore for a BBQ feast!

Burgers Etc. is a bit of an eclectic joint…the walls festooned with Americana, license plates and various instruments. Gives it a nice, warm, den-like atmosphere. The BBQ-smoke-infused air does nothing but help the appetite along…

Along with pretty decent BBQ, they offer up a variety of solid beers (and Budweiser), sodas as well as their own BBQ sauce.

This was, I think, my third trip to Burgers Etc. BBQ House. The first time, I had their “award-winning” burger. Although I can find no mention of this contest on the web, they claim to be the winner of CTV’s Best Burger in Vancouver. On my second trip I went with the BBQ Ribs and Beef Brisket Combo. The ribs weren’t all that special but the brisket oh, that brisket!

This time round, I’m here for the full meal deal…The Menu Sampler.

END_OF_DOCUMENT_TOKEN_TO_BE_REPLACED

The BBQ Pork Banh Mi at Saigon Ivy hits every mark. If there's a better sammich in these parts, please let me know. Sweet and savoury pork riddled with five spice; fresh off the grill, dripping its fatty juice. The crunchy daikon, pickled carrot and cuke balanced that out nicely. A nice, fresh burst of cilantro and jalapeno. All bundled in a crispy, crackly, very fresh baguette. All for about six bucks. Hard to beat. #banhmi #newwestminster #bbqpork #bestsammichintown #saigonivy
I had one task: make a Christmas dessert. For whatever reason, I completely forgot! Oops. I had one chance, on Christmas Eve, for reprieve. My only hope was that there was somewhere I could get a traditional German dessert. Then I remembered that Altmaerker Deli in Delta had brought in fifty Stollen a few weeks back. With fingers crossed, I rushed across the bridge in hope of snagging one of the last few. With prayers answered I left with an excellent and very boozy Stollen along with an assortment of incredible German sausages. Many thanks to Altmaerker for being a reliable source of traditional German fare. Du bist wunderbar!! @altmaerkerdeli #stollen #deutschesessen🇩🇪 #germanfood #lecker #weihnachtsessen
My first crack at Schnitzel in a long while. Should of gone with pork instead of chicken. That should of been obvious. Just a tad dry. The beer and bacon fat laden kraut and crispy Bratkartoffeln made up for that nicely. As did the solid Hefeweizen. Hearty German fare on a chilly winter night always hits the spot. #hausgemacht #deutschesessen🇩🇪 #schnitzel #germanfood #homecooking #bratkartoffeln #sauerkraut #foodstagram #lecker
It's that time. The Christmas Office Lunch. Trying to get ten hungry workers to agree on a spot is usually tricky. But we seem to have reached a concensus two years running. Bombay Bistro puts out one solid dish after another. Our regulars include their Lamb Biryani teeming with mint, cilantro, almonds and big hunks of lamb. The coconut infused Prawn Malai is always on order as well as any variety of Vindaloo. But this time we added a killer vegetarian dish to the rotation. Kadahi Paneer. It's an incredibly flavourful mix of firm Indian cheese, peppers, onion and tomato in a sauce laden with tumeric, black pepper, coriander, clove, ginger, garlic and a whack of chilli. Thanks to our big friend from Amritsar for that recommendation! A few of us requested our dishes be extra spicy and they didn't disappoint. They weren't crazy hot but enough to break a sweat! Altogether, a fantastic range of flavours that had the crew well satisfied. This looks like a Christmas tradition we'll be keeping! #bombaybistro #indiancuisine #burnaby #kadahipaneer #vindaloo #prawnmalai #biryani #indianbombaybistro #indianfood #burnabyeats
It's been far too long. For the past year or two I've been avoiding what was my favourite lunch spot in Burnaby. It was, for many years the most solid spot not just for their Pho but a wide variety of Asian soups. Every one of them killer. The Bún bò Huế and the Bo Kho. The Tom Yum Seafood Soup and the Taiwanese Beef Noodle Soup, always sensational. Then, for a time, it was just average and I looked elsewhere. A few other spots did the trick for a time. But then, elsewhere became commonplace. No place had so many stellar bowls. So, with head low, I made my way back to the best hole-in-the-wall in town. I grabbed #27. Stewed Beef Noodle. It's their amazing Taiwanese Beef Noodle Soup. Three extra-large hunks of tender, spiced beef swimming in a dense, perfectly seasoned broth in a tangle of chewy, thick noodles, laden with spinach spiked with fiery Thai chillies. Just phenomenal. Alongside were the most exceptional spring rolls. Outsized, crispy and oh so garlicky. Nothing compares. I've so missed Green Bamboo. And I'm so looking forward to reinstating my regular status. #greenbamboo #taiwanesebeefnoodle #burnaby #soup #chagio #crystalmall #springrolls #foodstagram #instafood
Comfort grub. #pattymelt #homecooking #sammich #foodstagram
Measuring. #youcanttellbutilovemyjobespeciallywhenitssaturdayandtheypaymetwiceasmuch #surveylife
Keeping score. #eisern #fcunion #fcunionberlin #fcubsc #bundesliga #tor #berlin #fußball #unionberlin #esgehtweiter #berlinderby #stadtduell
Amongst our usual lunch special choices a couple weeks back at Patsara, we threw in a big bowl of their Seafood Tom Yum. A very deep and rich soup with prawn, mussels, squid and whitefish all plump and fresh. I couldn't get enough of the broth. Strong hits of lemongrass and Kaffir lime leaves. A good funk from the fish sauce. And a very solid whack of chillies. My only problem was having to divvy it up four ways! An excellent soup. @patsaranw #patsarathai #patsaranw #tomyumsoup #seafoodsoup #newwestfood #newwesteats #thaisoup #thaifood #foodstagram
There are a few pretty good Vietnamese restos in New West. Most are ok, in a pinch. But Co Chau is a different story. I shouldn't base my opinion on a single visit but sometimes that's all it takes. The small things are the best clues. A tall, refreshing water glass with cucumber, lime and mint. Impressive. A killer Nước chấm, heavy on the garlic and fish sauce. A solid, flavourful, housemade chili oil. And then the soup. Their Bún bò Huế is absolutely stellar. A deep, rich broth. Tender cuts of beef. Plentiful herbage and veg. Thick noodles cooked to perfection. Big hits of basil and lemongrass. A piping hot bowl that hit all the spots. I'll be back again and again. A most welcome addition to the neighborhood! #cochaurestaurant #newwestminster #vietnamesefood #bunbohue #noodlesoup #eatnewwest #vietnamesesoup #foodstagram #newwestfood