Lee Garden Seafood is a somewhat new resto in Burnaby that replaced the infamous Grand Buffet. For many years, Grand Buffet was a solid, go-to spot for a cheap fill…the Uncle Willy’s of Asian fare. As the years went by, it slowly deteriorated into an unseemly dive with barely warmed chaffing dishes of nastiness alongside crunchy, past-due sushi and frostbitten ice cream. On our final visit, I pulled a ladle of soup from the tureen with a foot-long hair attached. Rock-bottom. They shut down, thankfully, a couple of years ago. This past spring the space was transformed into a rather luxurious new restaurant. Miss Vancouver Piggy captured the room beautifully in her post.

As is tradition in our office this time of year, we say goodbye to our summer students with a feast. This time around we went with a rather major meal at Burnaby’s newest Dim Sum joint.

Lee Garden is an extremely popular spot. On most days the parking lot is full by 11:30 a.m. with the overflow lining the side streets. Most dim sum items are in the $5 range so it ain’t bargains drawing in the crowds. It seems cleanliness, good eats and great service are the main attractions.

Har Gow will always be ordered. It’s a standard to go by. Here it’s labelled Lee Garden Special Prawn Dumplings. And these were pretty special. There’s a sizeable amount of fresh, firm prawn encased in a light wrap all steamed to a perfect degree. I haven’t come across many better executed.

Another standard, of course, is Sui Mai (Steamed Pork Dumplings). These were prepared very well. Tight, fresh ground pork, still juicy and full-flavored. The haphazard tossing of tobiko seemed odd. Why finish a nice dish so sloppily? Sherman noted this in his post as well. It’s very strange that a higher-end establishment would allow this kind of inconsistency to hit the table repeatedly.

From the Chef’s Specialty menu, we went with the rather inexpensive Pan Fried Noodle with Chive ($5.98). Nothing special but tasty, nonetheless. A good noodle cooked right.

Deep Fried Pork & Shrimp Dumplings. I love these mainly for the crisp and chewy wrap. The minced ingredients are on the minimal side but it is one addictive morsel!

For another crunchy, grease-laden treat, we grabbed a couple plates of Fried Shrimp Spring Rolls with Garlic. These were well-packed with crisp prawn and almost enough garlic. A sweeter dip would’ve helped but that’s just me being a gweilo.

END_OF_DOCUMENT_TOKEN_TO_BE_REPLACED

To me, places like Private Home Chinese Cuisine are the perfect type of Chinese restaurant. If I’m on my own I can choose from a good variety of lunch specials. Here they are eight bucks and you get a small mountain of food. And with a group there’s plenty of spicy Sichuanese to choose from as well as an extensive Shanghainese menu. In the past few months I’ve made this a regular lunch spot and now it’s become a Friday Lunch favorite.

For a while, Private Home had two locations in Burnaby. We visited the Imperial St. location last year but came away very unimpressed. Of the eight or so dishes we’d tried, not a single standout. It was just one big table of bland. The newer location on Kingsway, near Highgate Mall, is nothing like that. If you want heat, look no farther.

The first half of this post is from a few months back (with crappy iPhone photos). We went mostly from the Sichuan side of the menu. We dragged along a couple of teens from a high-school job shadowing program. We gave them fair warning but there was no fear.

Sliced Chicken with Hot & Peanut Sauce. Served cold and bone-in, this is bursting with flavor and texture. The chicken is poached to perfection…tender and still juicy. The slather of chile sauce and oil, nice and salty, yet not overpowering. A good hit of numbing peppercorn. The cilantro and peanut giving freshness and a good crunch. A solid starting point.

The Xiǎo Lóng Bāo (soup dumpling) are fairly standard. Some plump and full, others starting to sag. As you see the friendly grandma preparing them beside the cash register, you know they’re as fresh as can be. 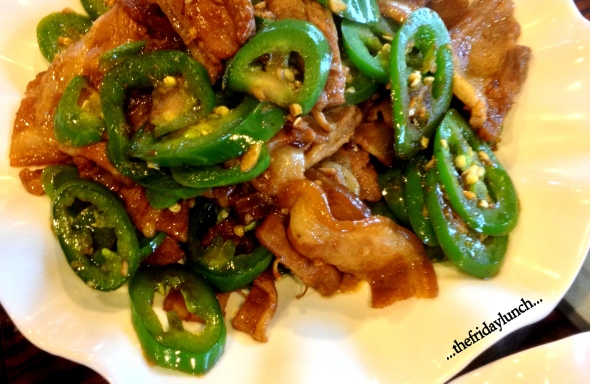 When we asked for a recommendation, we were told the Pepper and Pork with Spicy Sauce was a top-seller. Not quite what we’d expected. I mean, I love me jalapeñoes and all, but this is borderline nuts. You know how sometimes you get a tame, milder jalapeño? Well, these aren’t them. These are the fiery ones. As the pork was on the bland side all the flavor came from the peppers. After a few bites this just became painful.

The other side of that coin was the Shuizhu Niurou (Water Boiled Beef with Assorted Vegetables).

END_OF_DOCUMENT_TOKEN_TO_BE_REPLACED

Ah, Sunday..the best day of the week. Everything gets slowed down a notch or two, it seems. More often than not, it’s a late snooze, a slow meander to Starbucks and then off for another dining adventure. Lately we’ve been hitting up a lot of Dim Sum. This past week was no exception. Our mission on this day was to check out the award-winning Red Star Seafood.

Red Star has won a plethora of awards. Last year they took home the gold for their BBQ Duck at the Chinese Restaurant Awards. This year it was the “Most Innovative” award for their Dungeness Crab with Wild Rice.

As with most large, upper-scale Dim Sum restaurants, this one was packed to overflowing on a Sunday afternoon. Even with a reservation, we had to wait thirty minutes for an opening. After the third time the hostess told us, “Five minutes, we’ll call your name!”, we seriously considering crossing the street to Talay Thai. Just as I was about to bolt, our table was finally ready.

The ordering system here is somewhat confusing. The checklist is only in Chinese. The numbers correspond to the items in the regular menu. Photos of the menu can be seen here.

Here it is! The 2010 CRA Critic’s Choice Gold Medal winning BBQ Duck. I gotta say, this is damn good! Make that great! Very tender and juicy…the fat melted away to create the most succulent duck imaginable. The duck is basted for hours in a sweet five-spice marinade to achieve the beautiful lacquered finish.

END_OF_DOCUMENT_TOKEN_TO_BE_REPLACED

Inn Noodle House is a recent addition to New Westminster’s “dining scene”. It’s located at street-level in Plaza 88, New Westminster’s brand new condo/shopping/entertainment complex. It’s a reincarnation of the old Dragon Palace that used to reside  just up the road on 8th.

I was a bit apprehensive before this visit. You see, New West isn’t exactly flush with great Chinese food. There’s the odd bit of decent fare but it’s hit or miss. Having had a couple of pretty good dishes from Dragon Palace gave me reason for hope. On this visit, we decided to keep it basic. A couple types of dim sum and some items off the lunch special menu ought to give us a flavor of this new resto. 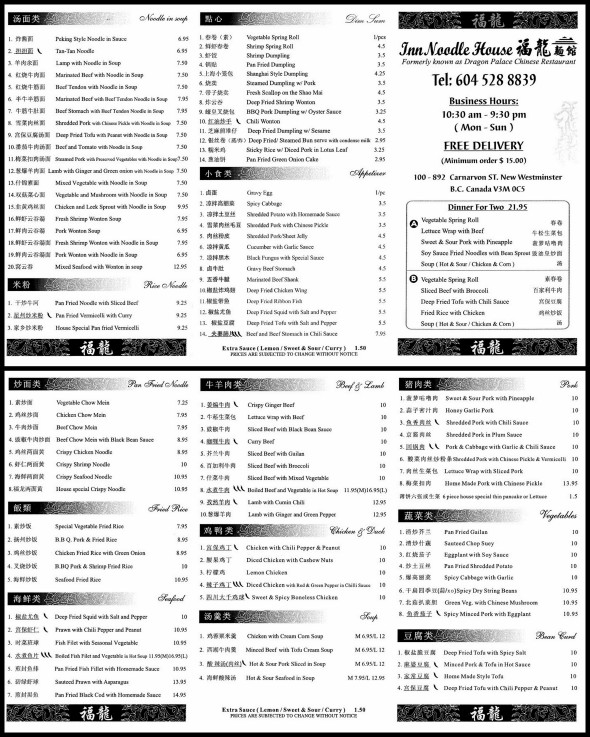 Like I said in my previous post, “If Hot & Sour Soup is on the menu, it will be ordered!”. This is one of the rare times I should’ve gone for the corn chowder or whatever else was on offer. Can’t say that I’ve had a weirder tasting bowl. As I was taking pics, The Gut mumbled something about beef. I thought he meant there was beef instead of pork in it. He meant there was beef consomme in it! It wasn’t horrible…we did finish it, after all. Just very, very odd with that flavor. 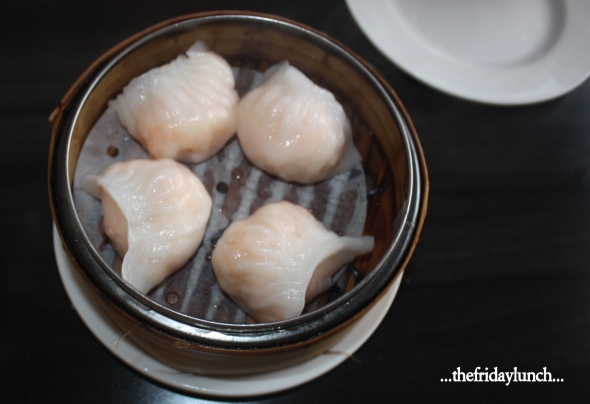 We were impressed by the Har Gow (Shrimp Dumplings) as soon as they hit the table…they look to be good-sized, well-made dumplings. Unfortunately, as soon as you try and pick one up, the wrap breaks…obviously over-steamed. That’s confirmed by a tough, chewy ball of glued-together prawn. Bit of a shame, that.

On the other hand, our second dim sum choice was a great pick. As the Pan-fried Dumplings and the Steamed Pork Dumplings weren’t available, our server suggested these…

END_OF_DOCUMENT_TOKEN_TO_BE_REPLACED

Long’s Noodle House has been on my “hit-list” for far too long. It’s a tiny, easy to miss spot on Main St. between 32nd and 33rd with a great reputation for their Shanghainese cuisine.

Don’t be too dismayed by the shoddy exterior. Long’s is another one of those places that puts emphasis on their food without much attention paid to aesthetics…my favorite kind of place!

We arrived during the noon-hour on a Monday. The restaurant was about half full. Before too long, it was packed. Our friendly server/owner, Sandy, was running the floor single-handedly. When I told her we were going to order about ten dishes, she didn’t bat an eye or even grab a pad of paper. As I reeled off our choices, she simply tapped a fingertip for each one. Amazing, really.

Our first dish is a must-order here. The Wine Chicken is served at room-temp in a beautiful ceramic crock. Chicken legs are poached in Shaoxing wine, broth, pepper, ginger and a bit of sugar. A great display of simplicity. 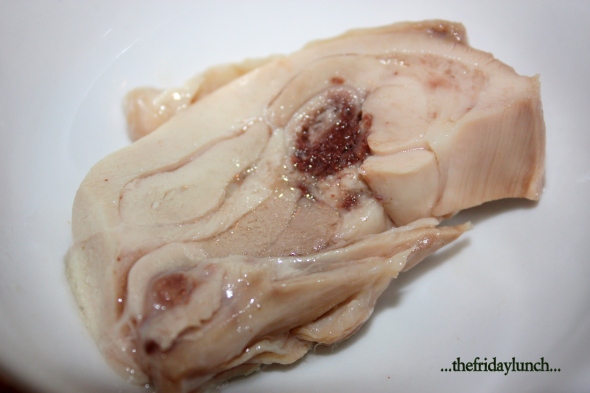 A sensational way to treat a chicken. Keep it simple and bring out the best of your product…works every time.

END_OF_DOCUMENT_TOKEN_TO_BE_REPLACED

A week or so ago, the plan was to check out Lin Chinese. Benzie, already there, called with the news that they were closed for two weeks. Grrrrr! On to Plan B…Thai Basil. Closed on Sunday. Double grrrrr! Whilst cruising down Denman on the way to our third option, Gyoza King, I called an audible and we wound up at Legendary Noodle.

Legendary Noodle has been on my wish list for some time. Any place that takes the time and effort to create their own noodles is always worth a visit or five. It turns out, at least in our case, that they make noodles to order! 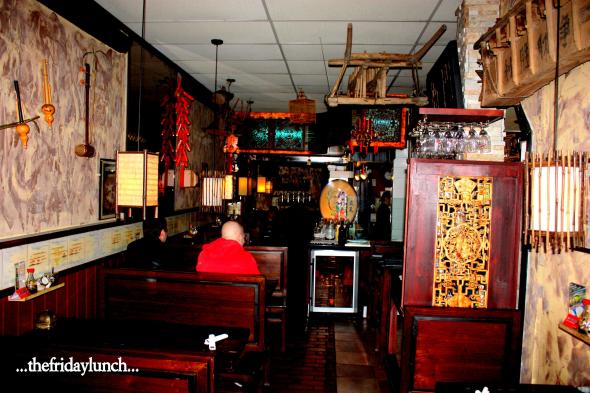 We arrived to an empty, very decorative, small room. As soon as we ordered, the head chef/La Mian Master sprung into action. 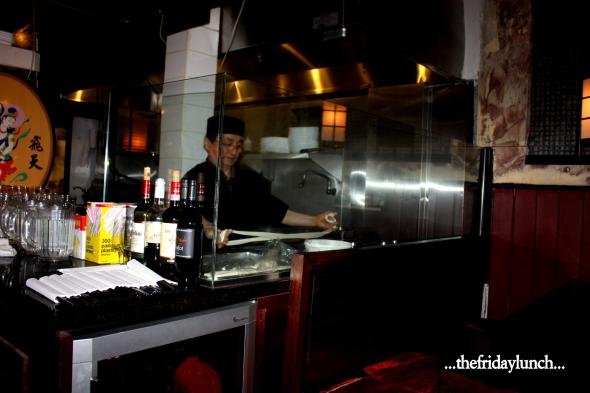 It’s always fascinating to see hand-pulled noodles being created. Yes, a lot of it is about show, but seeing your noodles being made before your eyes is always a novelty…it never gets old. When a noodle-maker puts himself on display, you know right away he takes pride in his work. You’ve just got to admire that.